A mix of Folk, Rock, Progressive & East Coast in a Classic Rock blender

Exciting times as it has now been a little over a month since the release of the "Imperfection" album. We have since released it in vinyl, which is exciting. If you want a CD, vinyl or a download and haven't got it yet please let me know. If you have and like our music feel free to spread the word. That is always appreciated.

Reviews have been very positive:

Note that the previously released Miracle Man remains our most popular video at close to 3.4k views and most streamed song on Spotify with over 2k streams. Silence is another song that has done well, being named video of the week on the International Indie Site Music Talks, and song of the week on Belter Radio in the UK.

In other news we have discontinued our relationship and page on Facebook. Over the years the platform has become less and less effective as a means to communicate with and engage followers. Posts that a few years ago would reach hundreds of people now often reach less than 100 and if there is higher engagement we get invited to pay to boost a post to reach more people. Our revenue stream is not enough to make it cost effective. Couple that with a series of scandals and bad press (no I don't wear a tinfoil hat ) and I felt it was time to leave. For now we remain available on Twitter, Instagram and our website and you can always reach out via email. We also maintain a presence on Bandcamp.

That's all I have for now and best wishes to all.

Imperfection Album is Out

Today we released our third full-length album and we are thrilled.

You can order downloads from our music page or our store and it is available at the usual suspect music sites like Bandcamp and also streamable on Spotify.

If you want a hardcopy CD you can also order it from our webpage. Contact us directly if you are closer to the Fredericton area and we can deliver and save on shipping charges. It is also available at Backstreet Records in Fredericton.

A huge thanks also to fred-e-scene for a most wonderful review and article. Wowza!!! 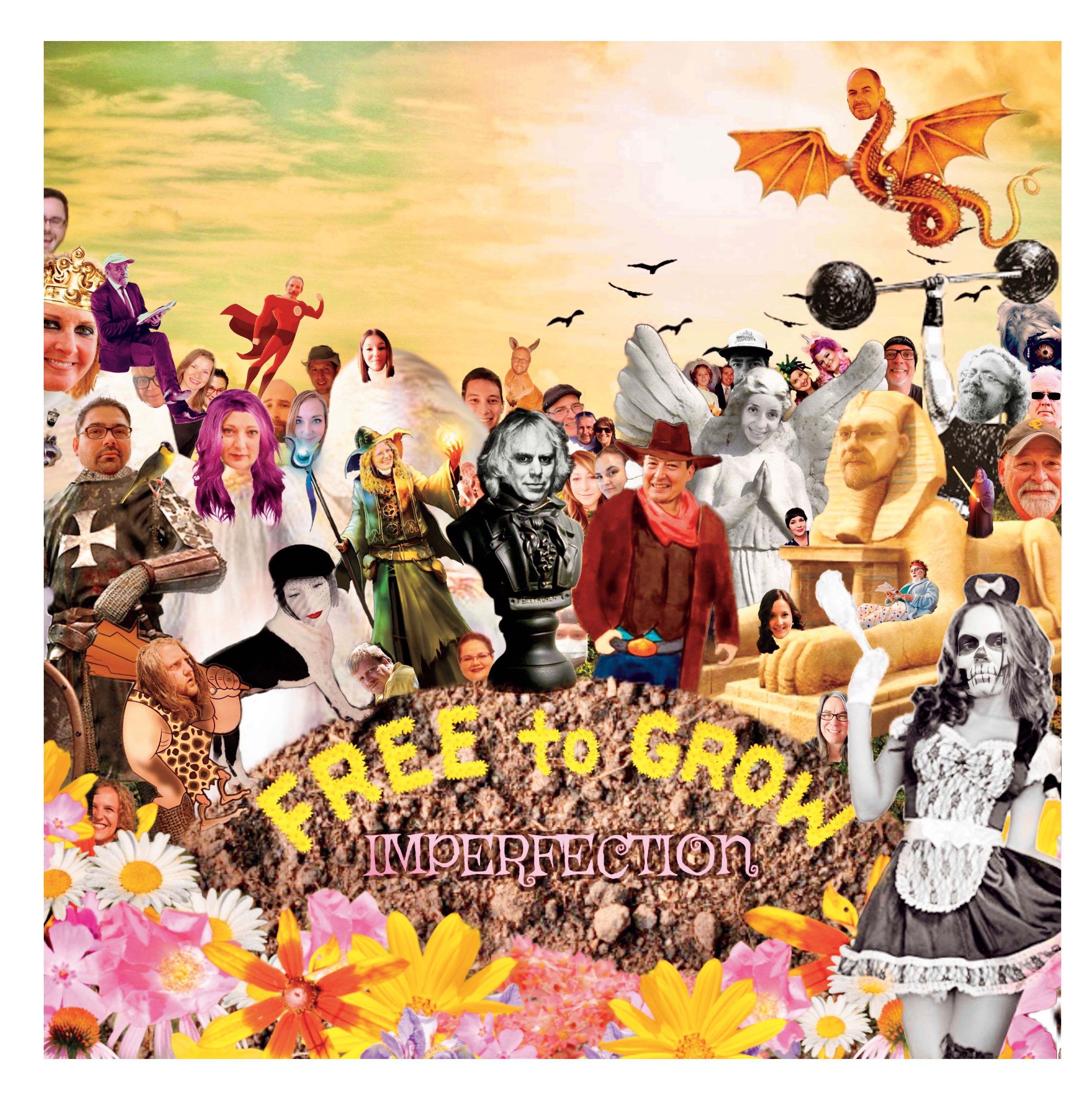 Happy New Music Friday everyone. No new music for us this Friday but soon it will be our turn.

Friday August 7 is our planned release date for the new "Imperfection" album. This will be our third full length album and we are stoked about it. Downloads from our website and the usual suspect places will be available then. Hard copy CD will also be available for $20 CAD (plus shipping if outside the Fredericton area). Check out the awesome album cover designed by Joshua Sangster (who happens to sing lead on 5 of 11 songs). Among the menagerie of characters are all the contributors to the album, plus an assortment of friends including health care workers from the Miracle Man video. Hovering over us all is our East Yorkshire dragon wizard Adrian Jenkinson who mixed and mastered the album.

Here we go with the release of another single.

A song for the times we are in. Our original plan was to hold off on more releases until the full album was ready for distribution. The band consensus was that it would be timely to release it, so here we are.

The song is called Silence and the video is up on YouTube.

As always, Peace and Love to all.

Our latest single "Imperfection" is now available and the video is up on YouTube. This song is the title track for our next album and you can now also pre-order the album for download or CD.

Add this to a second consecutive cancer-free set of tests and that means this has been a very fine week!

As always, Peace and Love to everyone and best wishes for staying healthy and safe.

New Album On The Way

I am happy to announce that all our tracks for the next album have now been sent to the studio for mixing and mastering. Expectations are that we will be able to release the album by late summer or fall of 2020. Stay tuned for a specific release date, and we will also be set up and advise you regarding pre-orders within the next month or so. Thanks, as always for your support.

As with everyone else we are navigating through the Covid-19 pandemic situation and pleased to announce that we are all keeping well so far. Best wishes to all of you out there also. Health-wise my last biopsy had a good result so things looking as good as possible with that. Thank you for your expressions of support and concern.

We are pleased to announce that we have released a new single and video. In the past our songs that have had elements of social commentary tended to be lighthearted and tongue in cheek. This song is not like those and was written the day after the mass shootings in El Paso and Dayton in early August 2019. Subject aside, we hope that you will enjoy it and, if so, will share it with others and even consider downloading it. :) The links are found below.

We also want to thank everyone for the wonderful response to our 3-song EP and Miracle Man video we released in July (with special thanks to Miracle Man Bruce Hughes and the healthcare staff who took care of him). The songs had airplay on radio stations around the globe and here in Canada. The video currently has close to 2.7k views to date, which is good for our little band.

No Change Track Info and Preview

Today has been a very busy and awesome day. Our new 3-song EP is out and available and the Miracle Man video is public on our YouTube channel. Today we had interviews with local print and radio media (Fredericton Daily Gleaner and CBC Shift). Music from the new release has had airplay out of Fredericton (CHSR FM, CBC Radio 1), Kingston (CFRC) and Calgary (ISX Radio) in Canada; EGH Radio in the United Kingdom and; notification of impending play in Australia (Valley FM Canberra) on Saturday (their Sunday, yes it's confusing).

There is more to come and we are grateful to all who support the band.

First of all there has been good news on the cancer front. The Doctors have confirmed that they removed the tumour in my bladder and that I will undergo follow up treatments but will not have to have my bladder removed. Some risk remains and it will still be some time before I can perform live again but things are looking up.

On an entirely positive front we are excited to announce that on July 12 we'll be dropping a 3-song EP titled Miracle. Sounds awesome to us and I hope you will enjoy. We'll also be releasing a video!!!!!

There are some fantastic performances by a number of guest artists on the EP including Tina Gaudreau (Mad Mary / The Dirt), TC Richards (8 Track Mind / STU Jazz), Rachel Forbes (STU Jazz), Conrad Mead (Downtown Blues Band / The Redemptions), Don Rigley (Frantically Atlantic) and Joshua Sangster (Honey Gut). We love to collaborate and the Fredericton area has a wealth of great musicians who are fun to work with.

Pease and Love to All

Some of you have been asking about our performance hiatus and wondering why we still have no shows lined up. We have not been applying to play any shows at venues or festivals since last summer and have had to turn down any opportunities that have arisen. At first it was due to our lead singer being pregnant and having a baby. That was all great news and Amanda's baby Freya grows more beautiful by the day.

Now for the rest of the story which some of you know. In late winter I was diagnosed with bladder cancer and the uncertainty surrounding treatments etc. has precluded an ability to make any commitments. Since that time I have undergone several procedures but the long term strategy has not yet been determined. The long term prognosis is still positive, but it will be some months at the very least before I can consider performing again. I look forward to that time.

On a more positive note we now have four songs which are almost ready to be released on an EP. A full album will also be in the works for later in the year. A huge thanks to Adrian at Hairy Monster Audio in Hull, UK who is helping us with the mixing process for this go round.

I thank you for your support and well wishes and please be advised that I am OK.

Our 2017 End of the World EP has had airplay all over Planet Earth and has charted on internet and terrestrial radio stations in Canada, USA, Europe and South Africa.

End Of The World

It may be near The End of the World but we aren't going anywhere.

Big thanks to all who have supported Free To Grow!!!